The circle of human and natural

„The circle of human and nature“-  is the performance by Lithuanian writer Kristionas Donelaitis poem “The Seasons”.

This sensitive and delicate performance attempting to understand the philosophical content of classic poem. It is an expression of bodies, it is present and past, nationality and age.

The creating of the Performance intriguing because it is not a traditional performance of the repertoire – a delegation from the National M. K. Čiurlionio arts schools visited Zelenogradsk students in 2014 July and August. Together with the Kaliningrad region students participated in the project for Donelaitis 300 anniversary here.

Performance was shown on the island of Kant (Knypava) at international festival “Place of peace“ in Kaliningrad. And attracted a large audience interest and support there. 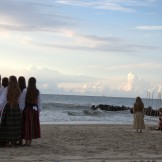 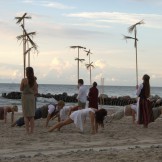 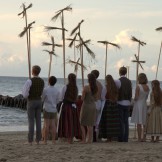