In a medieval town an enthusiastic doll maker, Coppelius, makes a mechanical doll named Coppelia. She is not the only one doll made by the funny man, but only she attracted the attention of Franz, who is engaged to a nice simple girl named Swanhilde. While others are enjoying themselves Franz keeps looking as Coppelia’s silhouette. The hypnotising eyes of this motionless creature disturb the young man. Having got into the master’s workshop, intoxicated by some drink offered by Coppelius, he sees his dream come to life and his agitated imagination becomes incontrollable. However, after the potion loses its power he realises that his vision is nothing else but an artfully made doll that turning round and round breaks in two. Swanhilde who comes with his friends forgives her fiancé and the performance ends with a merry wedding party. Coppelius and the doll he has repaired are also there. The story helps to love not a world of visions, but real people who are near us. 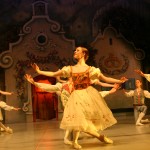 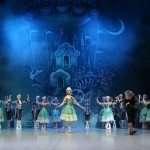 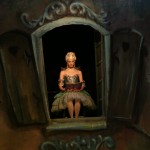